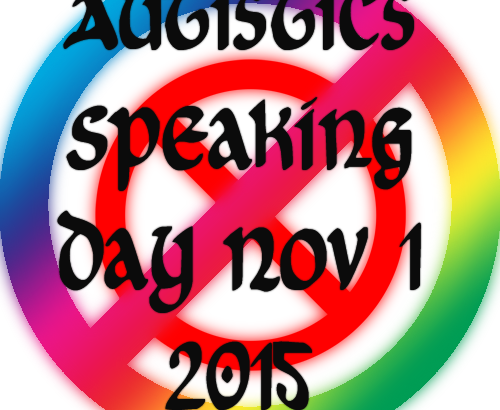 There is a shift taking place in the world of autism; one of many that have occurred since Hans Asperger first created the term. Some of the previous shifts have resulted in advancements towards autistic acceptance. Others have added to the unfair stigma that society still attaches to autism. Unfortunately to date the latter has overwhelmed the former.

When you have a media that values emotional stimming over truth, a support community that is addicted to using enhanced negativity to justify the need for more funds, and an ongoing debate over vaccines that has adopted autism as a piñata that ‘needs’ to be thrashed brutally and perpetually, there is little wonder that autism has become a stigmatised word. The autistic community, those of us with a diagnosis or an association with the vast autism spectrum, is beginning to stand up and show that it has its own voice, a voice that must be heard and responded to if the organisations that make up the autism community want to remain relevant within the next decade and beyond.

It has already started. Soon autism support organisations which do not include the voices of the autistic community will fade into memory and become irrelevant. More and more self advocacy groups are emerging every day. Institutions that demonstrate ignorance or misunderstandings of the needs of autistic individuals are being very publicly named and shamed through an ever militant social media machine. Yes, there is an imbalance in the shaming too as truth becomes distorted in clouds of anger, blame, misinformation and hysteria; but to deny that this response is the product of an increasingly frustrated community is to deny that there is a problem in the way in which autism is perceived in society.

On the plus side, there is a growing number of autism organisations that have recognised this shift in awareness and attitude who are making the necessary changes to survive into the 21st century and beyond by including autistic individuals and organisations as essential participants and as part of the governance of such organisations. By giving the voice of autism a say in the focus and direction of research, intervention and inclusion in society, these organisations will be the ones to grow and flourish.

Autism has a ‘voice’, whether it be spoken, typed, signed or behavioural. When you learn to understand the language of autism then you can start to appreciate the beauty of that language.